Bridging the gap between writing and seeing, this program brings the pages of the Millennium Film Journal’s 69th issue to life.

We’re delighted to host this program that brings together eight short films discussed in issue No. 69 “Deep Cuts” of the Millennium Film Journal. Drawn from the 2018 Flaherty Seminar and elsewhere, the films all engage with landscape and language through formally innovative means. Though each filmmaker is of a different geographical location and uses varying techniques within their work,  their films collectively produce a macrocosm of impetus and fellowship. This program will illustrate new resonances and curiosities, further supplemented by the writing in the latest issue of Millennium Film Journal.

“Harris deals mostly with African-American history, as in the two-part video installation Halimuhfack (2016), which features a performer lip-syncing to archival audio of an interview with Zora Neale Hurston against a rear-projected film loop about Maasai tribesmen and women.”

“Anti-Objects combines Hopinka’s concern with minority Native languages (in this case, Chinuk Wawa) with the change and variance of landscape… What does come together in Anti-Objects is, as its subtitle suggests, a space without path or boundary, a nation whose language and sovereignty exist as parts within an uncertain whole—a constellation that forms a living people.”

“Viewing 10,000 images in 10 minutes, we can visually shift our attention from the center of the frame on the sun, to the left, the right, or up or down, to capture fragments of representations and surface-penetrating color.”

“Otro Usos” was shot through malascopios, or reflective sculptures made of aluminum and glass, constructed and titled by Santiago Muñoz herself. Placed over a lens, a malascopio effectively turns the camera into a kaleidoscope; the root words, malo (bad) and copiar (reproduction), reference this transformational process and distortion of vision.”

“Evocative but never quite determinate, the enigma is a fundamental component of the Pat O’Neill aesthetic. It is generated not only through the combination of incongruous elements, but, even more relevantly, in the extraordinary ways the combinations are realized in his moving image works, collages and sculptures. An Extra Wander is O’Neill’s most recent single channel work, made in memory of his friend filmmaker Chick Strand (1931-2009).

“The numerous trees on display here, which appear in rapid bursts amid passages of black leader, were initially filmed using 8mm and 16mm film stock, which Saïto then hand-processed and recaptured using an optical printer. Here again, the forest manifests as a radically interstitial and intervallic space: an ecology characterized as much by separation and division as interconnection and continuity.”

“The camera traces a slow arc across the New Orleans skyline, drawing past a trombonist and sousaphonist’s bubbly interpretation of Close Encounters of the Third Kind’s (1977), a cellist bowing the same theme in front of a fenced-off Booker T. Washington Auditorium, a contrabassoonist sending ripples over the river, and so on. Where Spielberg’s original scans the skies, H-E-L-L-O’s bass-heavy instruments go down to the roots.”

“Suwichakornpong and Saenjaroen’s Nightfall point their camera lower in the social pyramid to explore the corporeal registers of the governed: the listlessness, anomie, and fatigue of a middle-aged woman who traverses impersonal spaces in Singapur while political speeches in the soundtrack trumpet the country’s economic splendor.”

is a filmmaker and writer, and is senior editor of the Millennium Film Journal. 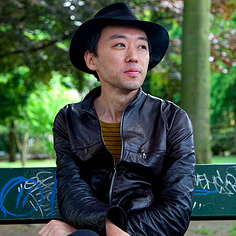 is a filmmaker and professor based in Montréal.